Many studies of stress ecology rely on determining an organism’s levels of relevant hormones, such as cortisol and corticosterone (CORT). While these hormones have many functions, organisms often increase levels of these hormones to allow them to respond effectively to stressful conditions. But this hormonal response poses its own challenge for scientists! Capturing an animal, restraining it, and taking a sample (usually of blood) to measure hormones is a stressful experience for the animal in its own right. How can we be sure that measured levels of these hormones represent the normal (or baseline) level, instead of a higher level we have created by catching the animal?

In cottonmouths, levels of corticosterone in blood plasma start to rise above baseline approximately four minutes after an individual experiences a stressful event (ie, capture by researchers).

One approach that previous researchers have taken is to capture a series of individuals after differing times of pursuit and restraint and then measure stress levels. Using these data, researchers can see how long after a stressful event hormone levels begin to rise. Any samples taken before this time should represent a “baseline” level. Previous work has emphasized a “3 minute rule”: that samples collected within three minutes of stressing an animal are generally at a baseline level. However, most of this work has been done in mammals or birds. Does this rule apply to other types of organisms, like lizards, which much of my research has focused on? As a PhD student in Tracy Langkilde’s lab at Penn State, I worked with a host of collaborators on an effort to answer this question recently published in General and Comparative Endocrinology.

A key impetus for this work was a project designed in collaboration with two high school students: Kiara Camacho from Reading High School and Jermayne Jones from Olney Charter High School in Philadephia. Jermayne and Kiara worked in the Langkilde Lab for two summers via placements at Penn State through the SEECoS program (Summer Experience in the Eberly College of Science) and Penn State’s Upward Bound program. These initiatives help students who have shown potential in high school via a 6-week summer preparatory program at PSU. This program aims to prepare them for future STEM classes as well as giving them real research experience by pairing them with an undergraduate mentor: in this case, Melissa O’Brien a PSU student in the Langkilde Lab (and now a biology teacher at Pennridge School District).

After experience studying the effects of urbanization on tadpoles in their first summer, Jermayne and Kiara had an interest in stress ecology. Following a group brainstorming session, we all decided to investigate a long-standing question in the Langkilde Lab’s work with fence lizards: How quickly does CORT, a stress-response hormone, rise in blood plasma after a fence lizard (Sceloporus undulatus) is exposed to a stressor?

Eastern fence lizards enjoy basking in the sun when not being caught by human researchers.

To answer this question, Kiara and Jermayne learned to catch fence lizards, take blood samples from them, and measure the levels of CORT in these samples via an EIA (results below!). The full team expanded on this dataset by gathering similar data in other species. Mark Herr, an undergraduate mentee in the Langkilde Lab, and Sean Graham, then a post-doc, gathered samples from two species of snakes: cottonmouths (Agkistrodon piscivorus) from Alabama and western rattlesnakes (Crotalus oreganus) from California. And Susannah French and Alison Webb collected samples from rock iguanas (Cyclura cychlura) in the Bahamas. 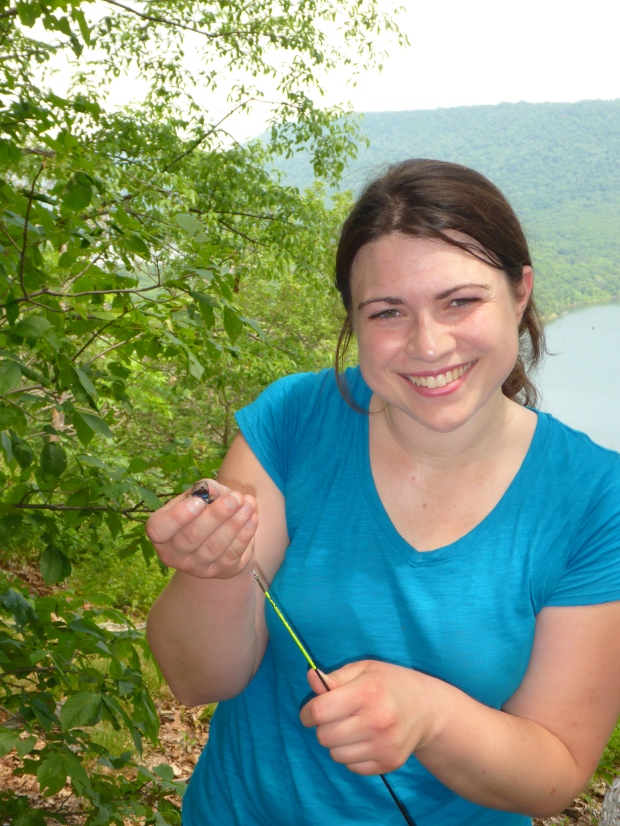 Melissa catching her first fence lizard at Raystown Field Station as part of this study.

Caty Tylan, a DVM and PhD student in the Langkilde Lab, pulled results from these four different study organisms together and coordinated our large group of collaborators in producing a study we hope will be useful to researchers studying stress ecology of diverse reptile species. Our results show that the general “3 minute guideline” likely holds for species of lizards and snakes. However, the timing of increases in plasma CORT levels can vary quite a bit between species. For instance, even 10 minutes after exposure to a stressor (chasing and catching by humans), fence lizards still did not show a strong increase in this stress hormone. These results suggest that, for some species, longer capture and sampling times may be acceptable, broadening the diversity of reptile species in which studies of stress ecology are feasible. For complete details, check out the paper!