Back in September of last year, Janie Barbato, an amateur herpetologist, dropped me a note on iNaturalist asking me to check out one of her observations of a bark anole (Anolis distichus). She had noticed that her observation was the northernmost in Florida on iNaturalist and was wondering if I knew about bark anoles moving north. Normally, I don’t pay as much attention to bark anoles since they aren’t actively a part of my research, but in digging into Janie’s observation, I realized that she was correct…hers was the most northern observation! Furthermore, after conducting an extensive literature search, we realized that while there were anecdotal reports of bark anoles from nearby (Martin County, Florida), there were no vouchered specimens, the gold standard for recording a species’ presence. This meant that Janie’s photos were potentially a county record for this species in Martin County. 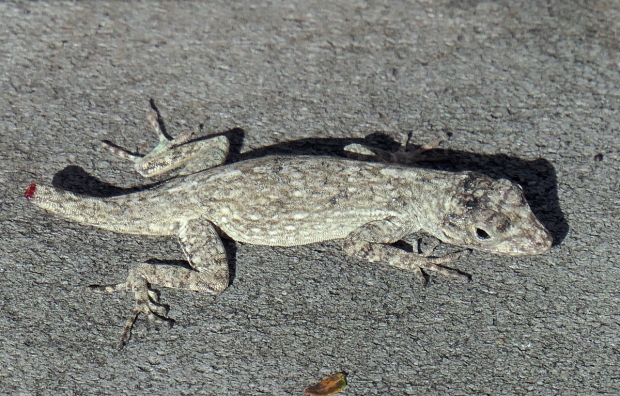 Vouchering a specimen means depositing evidence of an individual’s presence at a specific location and time in an official museum. In many cases, this would entail collecting the specific individual organism, preserving it in the museum, perhaps taking specific samples for DNA analysis, and recording a host of metadata, such as high quality spatial and temporal data. For citizen scientists, collecting a physical sample may not be possible for logistical reasons or may not be permissible due to lack of permits. However, some museums do accession (place into the collection) high quality photographs that document a species’ presence unambiguously. In this case, Janie and I worked with Neftali Camacho, Collections Manager at the Natural History Museum of Los Angeles County to create a digital photographic voucher for the specimen.

Once the specimen was officially in the collection, Janie and I worked together to write up a short geographic distribution note for Herpetological Review, a publication of the Society for the Study of Amphibians and Reptiles, which publishes short articles and notes, including those documenting the geographic ranges of species. This type of information may be particularly important in the cases of invasive species (like the bark anole!), where future researchers may be interested in when and where these species spread. Our note was published at the end of 2018!

All in all, writing this note was a great experience, as it showed me how valuable it is to have dedicated and interested observers of natural history on the lookout for interesting organisms in our world. Janie placed particular importance on the bark anole she saw (which I would not have done) because it was close to her home and she was familiar with the animals she sees in the area. Creating ways for citizen scientists like Janie to collaborate with scientists (like me and Neftali) is a great way to both invest the public in science and do science better. A win-win scenario! 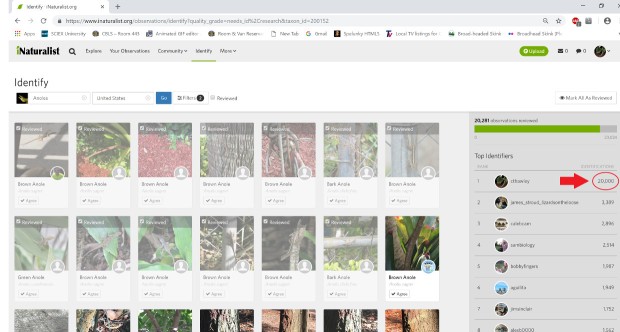 That’s a lot of anoles.

And in related news, Lizards on the Loose is cranking along in 2019. With still a month to go, we just broke 1850 observations! I also passed a personal citizen science milestone in the past few months: 20,000 anoles identified on iNaturalist! Given all the Lizards on the Loose submissions and our plans to participate in the upcoming Miami City Nature Challenge, 30,000 IDs should soon be in sight. I’m looking forward to seeing all the great observations rolling in from lots of different folks!